Best Time Of Day To Trade

Don’t have time to read the Guide now? Request a PDF version.

While this is especially true for scalpers and day traders, even swing traders can benefit a lot by executing trades during the most liquid time of day.

Lower transaction costs, larger than average price fluctuations and more trading opportunities are all closely related to the time you execute your trades.

In this chapter, we’ll cover the best time of day to trade Forex and explain its main benefits to your trading performance.

How does your trading style impact your entries

… getting the timing right can make or break your trading day

This means scalpers and day traders need to pay special attention to the time of day they trade, as less-liquid trading sessions may carry higher transaction costs and eat into their potential profits.

If you open plenty of trades during the day, getting the timing right can make or break your trading day.

Swing and position traders are less affected by the time of day they place their trades, since their overall profit-target and trading horizon is much larger compared to that of scalpers and day traders.

To determine the best time of day to place trades on the Forex market, you need to be aware of how the market operates.

Read:  What Is the Best Forex Trading App

Forex is an over-the-counter market, where currencies are traded during Forex trading sessions. Unlike the stock market where stocks are traded on stock exchanges, there is no one centralised exchange in Forex.

Instead, currencies are bought and sold in major financial centres around the world, called Forex trading sessions.

The most important of them is the New York, London, Sydney and Tokyo sessions, which span over different time zones, making the Forex market active 24 hours a day, 5 days a week.

Generally, if you’re looking to trade Asian currencies and cross-pairs that involve the Australian dollar, New Zealand dollar or Japanese yen, you could do so during Asian trading sessions (Sydney and Tokyo).

Besides the US dollar which is heavily traded during all sessions, Asian currencies have the largest turnover when the Asian markets are open. This means larger price fluctuations and lower spreads on trades that involve Asian currencies, which is a major advantage for day traders and scalpers.

The London-New York overlap – the best time to trade Forex

The Forex market has a daily turnover of around $5 trillion, and the London and New York sessions still account for the majority of that turnover. 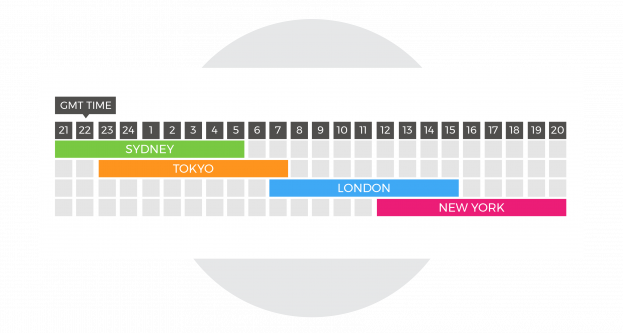 The US dollar is still the most-actively traded currency in the market, involved in nearly 88% of all Forex transactions, and all important news releases related to the US dollar are published with the opening of the New York session.

The London session, on the other hand, still remains the session with the largest daily turnover, covering around 37% of all Forex transactions initiated during a day.

The London-New York overlap, which is the time of day when the two largest Forex trading sessions are both open, traders get the largest price swings and lowest spreads to trade the market.

The London-New York overlap starts at 12:00 PM GMT and closes at 4:00 PM GMT, Monday through Friday.

It’s over the Atlantic

For day traders and scalpers, the best time of day to trade Forex is the London-New York overlap, which ensures the tightest spreads and largest price swings. Additionally, major Forex news is reported at the beginning of the New York session which can have a large impact on the rest of the trading day.

Unless you use a fixed spread broker spreads – the difference between the bid and ask prices – constantly change during the day. Avoid opening positions outside the main trading sessions, as liquidity in the market may still be low and spreads high.

Learn the skills needed to trade the markets on our
Trading for Beginners
course.

Short on time? Get a PDF version.

What Is the Best Time to Trade Forex