Different order types can result in vastly different outcomes; it’s important to understand the distinctions among them. Here we focus on three main order types: market orders, limit orders, and stop orders—how they differ and when to consider each.

It helps to think of each order type as a distinct tool, suited to its own purpose. Whether you’re buying or selling, it’s important to identify your primary goal—whether it’s having your order filled quickly at the prevailing market price or controlling the price of your trade. Then you can determine which order type is most appropriate to achieve your goal.

What is a market order and how do I use it?

A market order is an order to buy or sell a stock at the market’s current best available price. A market order typically ensures an execution, but it does not guarantee a specified price. Market orders are optimal when the primary goal is to execute the trade immediately. A market order is generally appropriate when you think a stock is priced right, when you are sure you want a fill on your order, or when you want an immediate execution.

A few caveats: A stock’s quote typically includes the highest bid (for sellers), lowest offer (for buyers), and the last trade price. However, the last trade price may not necessarily be current, particularly in the case of less-liquid stocks, whose last trade may have occurred minutes or hours ago. This might also be the case in fast-moving markets, when stock prices can change significantly in a short period of time. Therefore, when placing a market order, the current bid and offer prices are generally of greater importance than the last trade price.

Generally, market orders should be placed only during market hours. A market order placed when markets are closed would be executed at the next market open, which could be significantly higher or lower from its prior close. Between market sessions, numerous factors can impact a stock’s price, such as the release of earnings, company news or economic data, or unexpected events that affect an entire industry, sector or the market as a whole.

What is a limit order and how does it work?

A limit order is an order to buy or sell a stock with a restriction on the maximum price to be paid or the minimum price to be received (the “limit price”). If the order is filled, it will only be at the specified limit price or better. However, there is no assurance of execution. A limit order may be appropriate when you think you can buy at a price lower than–or sell at a price higher than–the current quote. 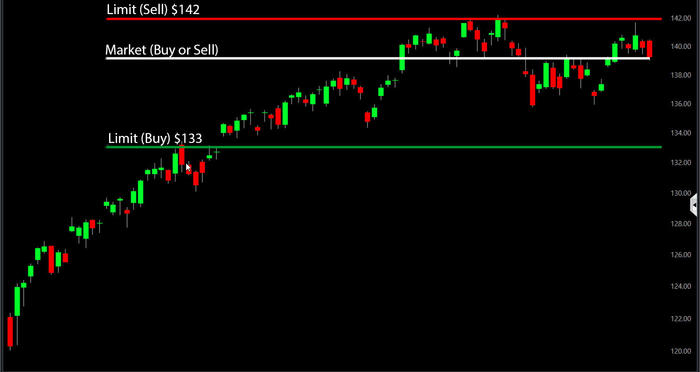 The above chart illustrates the use of market orders versus limit orders. In this example, the last trade price was roughly $139.

Read:  All You Need to Learn to Trade Forex

What is a stop order, and how is it used?

A stop order may be appropriate in these scenarios:

A stop order may also be used to buy. A buy stop order is entered at a stop price above the current market price (in essence “stopping” the stock from getting away from you as it rises).

Let’s revisit our previous example, but look at the potential impacts of using a stop order to buy and a stop order to sell–with the stop prices the same as the limit prices previously used. 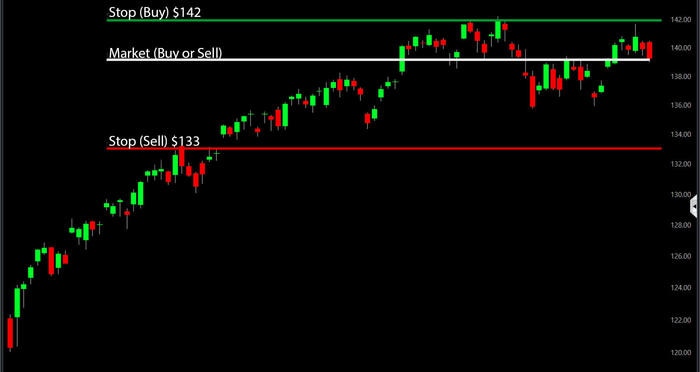 What are price gaps?

A price gap occurs when a stock’s price makes a sharp move up or down with no trading occurring in between. It can be due to factors like earnings announcements, a change in an analyst’s outlook or a news release. Gaps frequently occur at the open of major exchanges, when news or events outside of trading hours have created an imbalance in supply and demand.

Read:  Is It Haram to Trade Forex

The next chart shows a stock that “gapped down” from $29 to $25.20 between its previous close and its next opening. A stop order to sell at a stop price of $29–which would trigger at the market’s open because the stock’s price fell below the stop price and, as a market order, execute at $25.20–could be significantly lower than intended, and worse for the seller.

Stop order: Gaps down can result in an unexpected lower price. 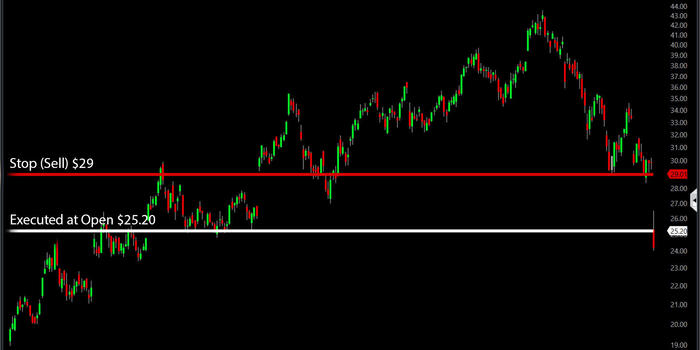 In a similar way that a “gap down” can work against you with a stop order to sell, a “gap up” can work in your favor in the case of a limit order to sell, as illustrated in the chart below. In this example, a limit order to sell is placed at a limit price of $50. The stock’s prior closing price was $47. If the stock opened at $63.00 due to positive news released after the prior market’s close, the trade would be executed at the market’s open at that price–higher than anticipated, and better for the seller.

Limit order: Gap up can result in an unexpected higher price. 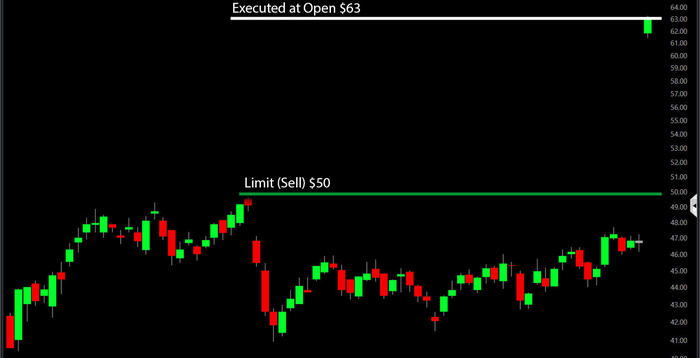 Many factors can affect trade executions. In addition to using different order types, traders can specify other conditions that affect an order’s time in effect, volume or price constraints. Before placing your trade, become familiar with the various ways you can control your order; that way, you will be much more likely to receive the outcome you are seeking.