The strategy in detail

When to open a position? 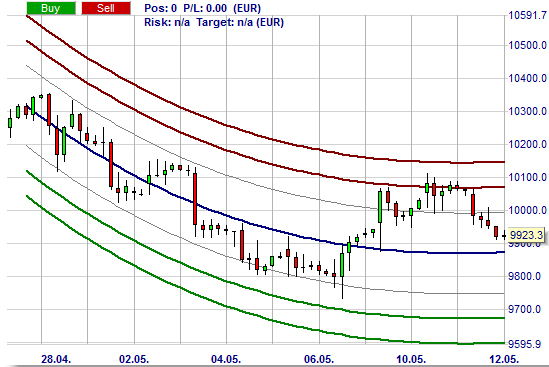 Read:  What Do You Need to Trade Forex 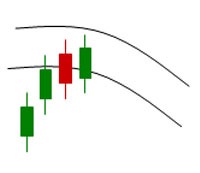 This
example
shows three candles which penetrate the third band. Only the third candle actually closes within the third band. The position is opened at the opening price of the next, new candle.

An alternative for the even more prudent trader is to open the position only when the market price hits the outer edge of the third band.

Attention. The COG bands are dynamic. They are not static. The centre of gravity line and its related bands change based on the current market price. It is entirely possible that a signal located in the third band today, visually, no longer lies in the third band tomorrow. Given the dynamic nature of the bands it is not possible to back-test this strategy.

When to close a position?

In order to close a position traders can rely on Belkhayate’s COG timing indicator. This indicator is an oscillator which oscillates through three zones: the neutral zone in the middle, the exit zones and the alarm zones. In the neutral zone nothing happens. In the exit zones positions can be closed. The alarm zones can correspond with entry signals. 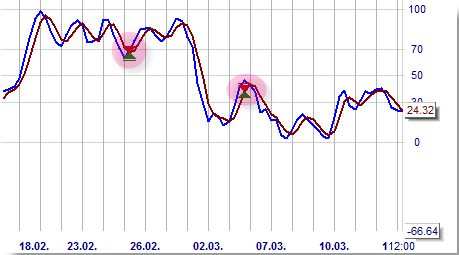 The COG Timing indicator gives the impression that the full potential of a trade is not exploited. As a stop the indicator also appears less suitable. Traders could use one of two alternatives: the ATR or the Slow Stochastics. In practice the Slow Stochastics probably enjoy a slight preference as a combination with the COG strategy.

Alternative 1: Target price and stop can be determined on the basis the ATR (average true range). Traders should respect a return-risk ratio of 2 or more when determining their target and stop. If the target is 2x ATR then the maximum stop can be 1x ATR. 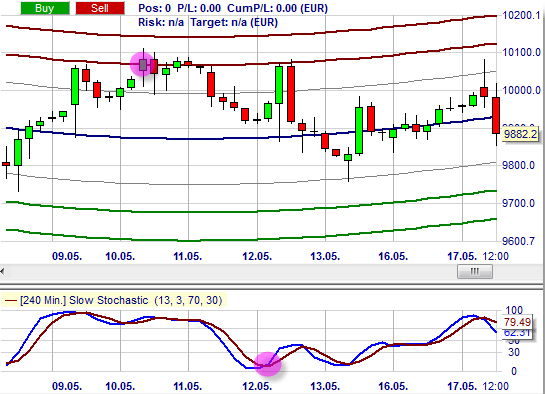 In this
screenshot
a short position (-1) is opened when the market price deviates into the third, upper band. The position is closed when the fast stochastic crosses the slow stochastic upwards.

The Centre of Gravity strategy is precise regarding entry signals. The exit rules are a bit more vague. The trader can remedy this himself by using, for example, the Slow Stochastics. The COG strategy generates only about 4 signals per month per instrument. But given that the strategy can be applied to all indices, forex pairs, commodities … traders can work with a wide range of instruments to make up for the infrequent signals.

Read:  How to Use Ema in Forex Trading